In Kurulus Osman Episode 53, Umur proves that Dundar is a traitor. Osman gets furious because he didn’t give the ring earlier. Dundar arrives and overhears their conversation. Dundar tries to escape right away. Osman orders his soldiers to close the gates of the city and arrest Dundar. Petrus tells Boran that Osman knows that Dundar is a traitor. Osman calls a meeting of Beys in his tent. Osman shows the ring and asks everyone about it. Osman tells about the ring their father gave Dundar.

Beys don’t understand what’s the point but Osman explains that Dundar is a traitor he has been looking for for a long time. Dundar reaches the caste using tunnels under Sogut. Malhun arrives at the plain and clarifies to Osman that why she has not shown the ring earlier. Osman tells Bala to follow Hazal who might know the whereabouts of Dundar. Dundar meets Nikola and tells the whole situation. In Kurulus Osman Episode 54 Urdu we Dundar is going to face his destiny.

Nikola tells him not to worry about anything. Hazal gets worried that Dundar has left 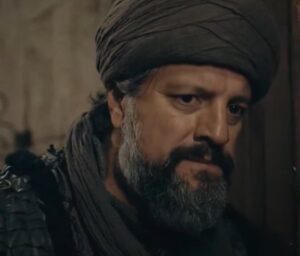 without notice and shares her concern with Osman. Osman gets angry at her and says that she knows everything but Hazel denies it. Petrus is worried that Hazal can tell a lot of things to Osman. Hazal arrives at Petrus’ shop and asks about Dundar. Petrus tells Hazel about Dundar. He tries to capture and kill her but Osman and his Alps stop him. They arrest Simon and Petrus. Kayis cannot believe that Dundar and other people are traitors.

Aygul is very sad and furious about his father as she tells Osman that he must be punished. Osman investigates the traitors but can’t get any answers. Petrus and Simon decide to tell Osman about the whereabouts of Dundar. Osman is not very surprised to know that Dundar is hiding in the castle. Aygul gets angry with Hazel and tells her that she is the reason for his father becoming a traitor.

Osman sets a trap for Dundar using the help of Simon and Petrus. Osman calls a meeting of Beys and tells them about the gold Nikola demanded. Beys do not agree to pay so much gold. Osman talks with Simon and Petrus and offers them their lives in return for Dundar. Simon agrees because he knows otherwise Osman would kill him. Simon reaches the castle the next day and talks with Dundar. He tells Dundar that Nikola is going to sell him very soon. Simon tells him that he would take him to Constantinople. He tells him to dress like a Byzantine soldier and meet him in the Forrest. Dundar reaches Forrest but gets captured by Osman.