Sanjar goes at some place by plan and shot an arrow in Ghazali’s heart. After this, he disappeared from that place. Hassan Sabah learns about him and asked Nizam for the assassination. Qasim falls in love with Elcin and proposed her. Elcin reacts badly upon his proposal and insults him. Behram tells that Arslantas and Sanjar would meet with Dai soon. To get the relics from Fatimids, Yorgos and Commander Andreas secretly make a plan. Sanjar sees the spies who killed the Turks. He then, at the moment, takes revenge the murder of innocent Turks. Hassan sees Ghazali’s books in Khayyam’s house and reports to Dai. But he instructs him to stay calm.

Terken Sultan’s mission is to find the truth. For this, he appoints a servant and directs him to follow Elcin. The servant is now following the Elcin and sees her going to the market. There, Elcin talks with Kilij and a merchant secretly but is unaware of being followed by a servant. The servant learns all about this secret conversation and quickly reaches to Terken. He informs Terken of all the secrets told by Elcin. 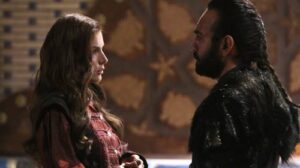 On the other side, Hassan is finding Ghazali and thought he may be saved by someone. Tajul Muluk caught the merchant in the market and force him to serve the Seljuk Empire. Turna is still convincing Sanjar for herself. Sanjar clearly tells her that there is nothing in between us. Turna again tried to change his mind, but he didn’t change his decision.

On the next day, Behram made a plan to take Arslantas and Sanjar to a secret place. Here, Hassan comes to talks with Dai and says that Ghazali is still alive. As Hassan disobeyed Dai, so he got angry with him. Afterwards, he realized that Sanjar is a traitor. Elcin planned to meet secretly with a merchant in the forest to know about her brother Kilij. Merchant takes her where her brother was staying. Sultan Malik Shah wanted to save the holy relics and Sanjar. To perform this duty, he sent his son Tapar on the way.

Behram knows about Sanjar and Arslantas and reached to them when they were waiting to meet with Dai. Behram suddenly approached them and tried to kill them. However, Seljuk spies came there and saved both of them. Elcin went to the place told by the merchant. She was expecting to see her brother Kilij. But when she opens the door, she surprised to see Sultan Malik Shah in front of her.

Sanjar followed Bahram and fights with him. However, he succeeded to recover the relics. Finally, Yorgos appeared from hiding and says to avenge his brother’s death from Sanjar. Sultan Malik Shah ordered his son and Seljuk soldiers to search for the Sanjar. Yorgos and Sanjar fought for a long period. As Sanjar was in a critical situation, so he couldn’t defend anymore. Meanwhile, Yorgo threw him off a cliff and take the revenge of his brother’s death.